I make homemade cauliflower pizza crust pizza.  It is not that hard to do.  Takes about 10 minutes to make one and then the cooking time is not long.  It is even easier if you buy already riced up cauliflower in a bag from a store like Trader Joes, Costco, etc. and it is not expensive at all.

I have a recipe that I have used to make a pizza with Cauliflower crust.  It is really good.  http://www.onegoodthingbyjillee.com/2012/08/the-astonishing-cauliflower-pizza-crust-you-have-to-taste-it-to-believe-it.html

Below is my caulfilower-based home-made Margherita pizza and salad that I shared with my husband.  Less than 5g of carbs per half of that 9 inch pizza.  Totally delish and low carb.  The base was delish and didn’t miss the pizza crust.

DID YOU READ THAT RIGHT?  5g of carbs per HALF of a pizza!

AND LOOK AT HOW GOOD MY PIZZA LOOKS!  Tasted good too.  You can do whatever toppings you like.  I make mine margherita style. 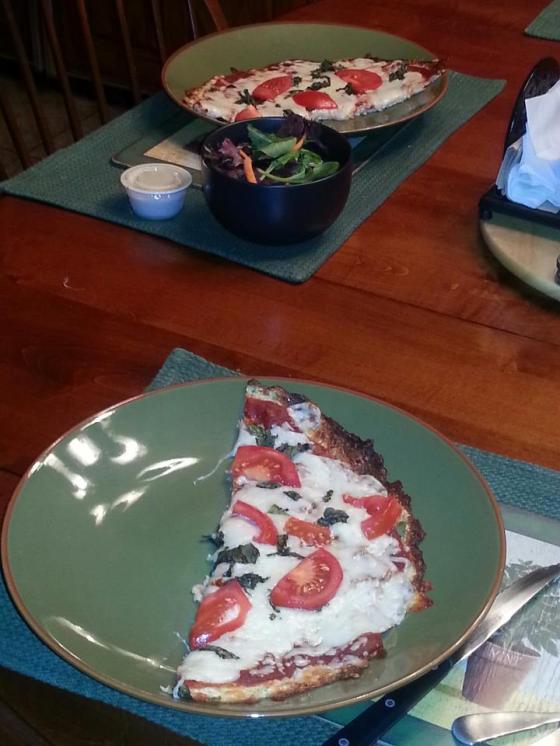 Because the base is mostly cauliflower and cheese….it is low carb!

But what about the already-made cauliflower pizza crusts out there at the stores?  Costco has them, Trader Joes and now Green Giant has one. 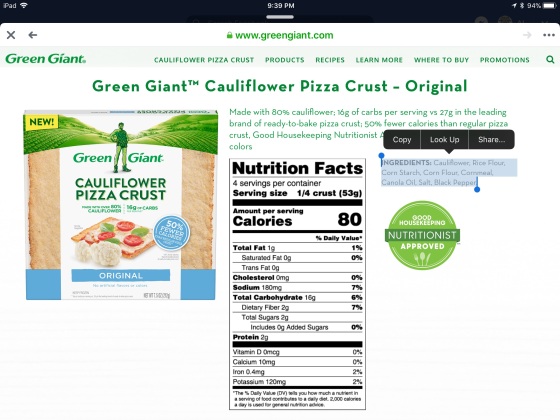 Green Giant is no different than many of the others out there that are pre-made.  The slices are made to be able to be strong and stiff like regular pizza crust (My pure cauliflower home-made one is not that solid, so you can’t hold it and need a knife and fork–but it is low carb.

Green Giant says that their crust is low-carb.  I have news for you, it isn’t low-carb, it is just lower than regular pizza crust. It  is 16g of carbs per quarter of the whole pie.  If you eat the whole pie, it is 64g of carbs.  Yes, there is no wheat, but it is only 80 percent cauliflower and the rest is a bunch of stiffeners and junk.  Such as:  Rice Flour, Corn Starch, Corn Flour, Corn Meal (I never recommend corn in a diet at all because of all of the starch in it!) and that crappy oil–Canola Oil (what the hell is a Canola anyway?)

Now, don’t get me wrong.  A regular wheat pizza crust is way more carbs.  1/4 of a pizza crust from Trader Joes is approximately about 50g of carbs.  So, that is a lot!  If you eat the whole thing, you eat about 200g of carbs.  No wonder people on My 600 Pound Life are able to keep the weight on so much.  For many of them, their food of choice is pizza.

On this diet, if you eat between 50 and 100g of carbs per day, a quarter of a wheat-based pizza could ruin everything.  So, 16g of carbs of an already-made cauliflower-based pizza crust seems great and especially for those who are gluten and/or wheat sensitive.  However, I still think that is a lot of carbs if you want to lose weight.

Remember, if you make a cauliflower and cheese pizza crust from the recipe above, you can eat the entire damn pizza for about 10g of deliciousness.

My husband convinced me to go to California Pizza Kitchen for their new cauliflower-based pizza.  I was excited to go somewhere, where I could get someone to cook for me and it be pizza without wheat.

Again, the nutrition on this pizza crust was same issue with how many carbs and filler are in their crust–not much different than the pre-made ones at the markets.  It tasted ok, but I felt like I was definitely going to have to spend two days to just get my weight back in order and sure enough–that is what happened.  So, I don’t really recommend it for a diet, but for those who can’t eat wheat and want just a slice if they are weight conscious–it was good.  I happen to like my caulfilower base better and I can eat more.

Sugars 4grams
Protein 16g
All in all, I won’t be eating this again for a long time and I will stick to eating meatballs and salad at Italian places, and eating my homemade cauliflower-based pizzas at home.
I hope this information was helpful.