Today was TRY NEW FOOD DAY!  This bread is great for those who have issues with wheat!  They are wheat and gluten free.  And it is better than having bread that is 15g plus carbs per slice.

Remember:  You can only have 50 to 100 g carbs a day.  So, if you eat most of them in ONE tortilla, then now do you know why you can’t lose weight?

My nearby markets have not gotten the Julian BakeryPaleo bread in yet (with 1g net carb), so I ordered it on the website and today it arrived!  I ordered both kind…the almond flour one and the coconut flour one.  I have to say, they aren’t bad.  You have to put things on them of course.  I tried cream cheese, light butter and I might try a sandwich soon.  The coconut is lighter, as the almond was heavier.  I made the mistake of eating the almond slice dry without a drink and I almost choked.  It is heavy, so have a drink to help wash it down.  But, it did the trick–the desire for something heavy was satisfied.  I put the loaves in the fridge because they are very natural and will go bad fast.  Here is the link for them. 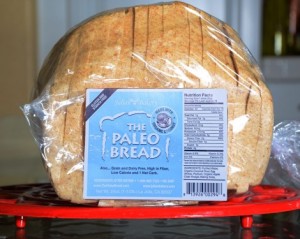 I would like to also remind everyone from a previous blog, that one of my favorite breads, (but it has wheat and gluten and should not be consumed often if you are wheat or gluten sensitive) is the Western Bagel Perfect 10 bagel.  10 g net carbs and delish!  There are many stores that carry it, or you can find them at low carb stores online like LowcarbU.com or you order a few bags at the Western Bagel site and freeze them.  http://www.westernbagel.com/products/the_perfect_10/perfect_10.php

Another great bread-type item are low-toritallas.  Again, they have wheat and gluten, but don’t do them often.  My favorite ones are the ones that are at Albertsons and Costco, or even netrition.com. (Trader Joes has a different brand, but they only have one low carb tortilla package, but they are good) 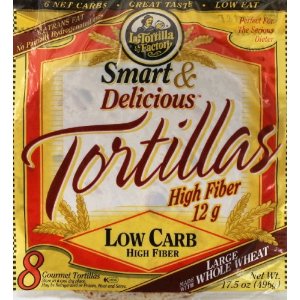