I had a large delicious burger.  It was so good!  You don’t have to starve on a diet.  When you aren’t on maintenance like I am, you might have to eat 2/3 of what I ate, but you can still eat it.  That is the cool part!

So, here is a picture of my burger. 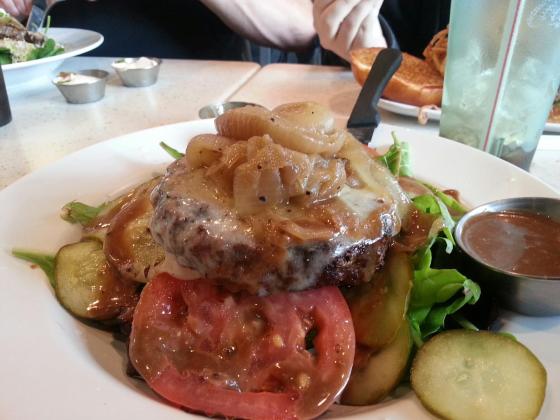 So, let’s look at the carbs of my choices.  I gave up eating 40g of carbs by having my burger as a salad and not in a bun!

–My burger had NO carbs, and had a lot of protein.

–cheese had less than 1 carb.

–My couple of slices of tomatoes had maybe 1 g of carbs.

Here is the hairy part.

–You have to be so careful what you get.  I ordered sautéed onions.  This could be a problem.  If you look online at thecounterburger.com and look up their nutritional information, you will see that the whole plate worth is about 9g of carbs.  But, I only ate half.  So, 4.5 for me!

–I had the Dijon balsamic vinaigrette, but I only had half, so instead of 15,  I had maybe 10g of carbs.

I ate this whole thing and only had about 21g of carbs, which is really good for a larger meal.  I had to think carefully when ordering.  I tasted someone’s cookie and probably had another carb, but I did not have a dessert there.  I waited until later for Carbolite as my last protein of the day out of 6 and consumed 15g of carbs with that.  As long as I am between 50 and 100g of carbs a day (the closer to 50, the better), I am ok.

So you can have good food on a diet, just select carefully.  If I had the honey mustard  or ranch dressing, I could have sliced off another 5g of carbs.

So, eat, but choose wisely.