Blog today is based on this Daily News article, and then halfway down is a DELICIOUS looking cocoa-nut brownie recipe with 8 net carbs per brownie!!!

After years building his career and credibility on carbs, award-winning baking instructor and bread cookbook author Peter Reinhart was an unlikely candidate to become an ambassador for low-carb, gluten-free living.

And yet his just-released “The Joy of Gluten-Free, Sugar-Free Baking” (Ten Speed Press, 2012) puts him squarely at the top of the heap of writers, bloggers, bakers and chefs clamoring to satiate America’s hunger for a life — or at least a dinner or two — lived with fewer carbohydrates and less of that pesky, yet ubiquitous wheat protein known as gluten.

Reinhart has long been considered one of the nation’s premier bakers. His gorgeous, painstakingly researched books blend textbook-worthy detail with a gentle voice that masterfully leads readers through the science and romance of transforming carbs and gluten into deliciousness.

So why change? “I wanted to add something totally new that no one else was doing,” he says of his book, which he co-authored with flour developer Denene Wallace.

That something new is a fresh approach to gluten-free baking.

Traditional gluten-free recipes turn on what Reinhart calls “the holy trinity” of starches — rice flour, tapioca and potato starch. Those starches work in place of gluten, but they also happen to be startlingly high in carbohydrates. He wanted recipes that blended low-carb and gluten-free.

His approach, developed in collaboration with Wallace, relies on finely ground flours of almonds or pecans. Some recipes also call for flours made from seeds, such as sunflower or sesame.

“With the nut flours, you’ve got a lot of natural oils in there and no starches that will go stale,” he says. The added benefit — and perhaps, he believes, the most important — is that nut flours reduce the carbohydrate load in the bread, making the products suitable for diabetics and others watching their carb intake.

“I’m always fascinated by new frontiers, by what’s the next thing coming that nobody’s tapped into,” says Reinhart, a baking instructor at Johnson & Wales University’s College of Culinary Arts in Charlotte, N.C. “The biggest concern for us was the growing diabetic community,” which is particularly sensitive to the carbohydrates in food.

Gluten is a protein found in wheat, rye and barley. It gives bread its elasticity and allows it to be pulled into long loaves, such as baguettes. And it is the element that creates the air pockets that give breads much of their texture. But some people are sensitive to gluten. The most serious sensitivities lead to celiac disease, which causes abdominal pain, bloating and intermittent diarrhea.

Gluten-free breads tend to be more dense than traditional breads. To combat this, many of Reinhart and Wallace’s recipes contain xanthan gum — which stabilizes and thickens — to help mimic the texture of traditional bread. To get around the need for high-carbohydrate sweeteners, they rely on stevia, a zero-calorie sweetener made from a plant extract.

Reinhart’s next frontier? Breads made with flours created from sprouted grains.

Sprouted grains are more efficient nutritionally, Reinhart says, and produce a greater amount of food than unsprouted grains. When a grain is sprouted, he says, the vitamins it contains shoot up and it becomes more nutritionally dense. There are only a couple of mills in the U.S. producing sprouted grain flour, he says, but he believes it is the way of the future. Bread made from sprouted wheat flour also is sweeter and less bitter than bread made from traditional whole wheat, he says.

“It just makes sense that it’s a great way to eat,” Reinhart says. “And once you can improve the flavor it becomes intriguing for all of us. I need to go into that and see how far we can push it.” 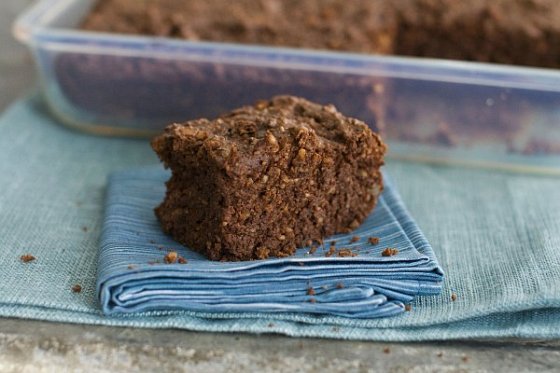 Heat the oven to 350 F. Line an 8-inch square baking pan with parchment paper, then mist it with cooking spray.

In a medium bowl, combine the pecan flour, almond flour, Splenda or other sweetener, cocoa powder and baking powder. Whisk until well mixed.

In a large bowl, whisk the eggs, soy milk, butter, vanilla and liquid stevia until thoroughly blended. Add the flour mixture and whisk or stir with a large spoon until all of the ingredients are evenly incorporated to make a smooth, sticky batter. Pour the mixture into the prepared pan, spreading it in an even layer.

Bake for 15 minutes, then rotate and bake for another 10 minutes, or until the brownies are just slightly springy but still jiggly when pressed gently at the center. If you like fudgy brownies, remove them from the oven at this point. If you prefer them to be more cakelike, continue baking for a few more minutes, or until a toothpick inserted at the middle of the brownies comes out clean.

Let the brownies cool in the pan for at least 15 minutes. You can either cut the brownies in the pan, or transfer the whole piece to a cutting board before cutting. Cut them in a 3-by-4 grid to yield 12 brownies.